For the Pistachio Ice Cream
Place the pistachios in a dry medium saucepan and set over medium heat. Toast, stirring for 5 minutes, being careful not to burn. Remove the pan from the heat to cool slightly, then add the milk and heavy cream; bring to a simmer. Transfer the mixture to a blender with the honey. Puree until smooth; return to the saucepan. In a heatproof bowl, whisk the sugar and egg yolks until smooth.

While whisking, gradually pour half of the hot cream mixture into the egg yolk mixture. Gradually whisk the mixture back into the saucepan. Return the pan to medium heat and cook, while whisking, until it reaches 185°F. Remove from the heat and pass through a fine-meshed sieve into a bowl set over ice. Stir until well chilled and spin in an ice cream machine according to the manufacturer’s instructions.

For the Pistachio Dacquoise
Preheat the oven to 350 degrees F. Line a rimmed 9-½ x 13-inch baking sheet with a Silpat or parchment paper and nonstick cooking spray.

With a rubber spatula, fold the butter into the whites until no streaks remain. Sift the pistachio flour and sugar into the mixture in 3 additions, folding with a spatula each time, until well combined but still fluffy. Spread the batter onto the prepared baking sheet in an even layer and bake for 14 minutes, or until the edges turn dark brown and the center is springy.

Cool at room temperature, and flip onto a cutting board. Remove the parchment or Silpat, and use a 2 ½ inch biscuit cutter or a knife to cut out 8 discs from the dacquoise and with a knife cut 8 ovals.

Return the dacquoise circles to the warm oven until dried, about 30 minutes. Cool, then transfer them to a food processor. Pulse into fine crumbs; reserve for croustillant tuile powder.

For the Vanilla Poached Cherries
Pick 8 cherries for garnish, leaving the stems attached, and scoop the pits from their bottoms; set aside. Stem, halve, and pit the remaining cherries and place in a heatproof container.

In a medium saucepan, combine 2 cups of water, the sugar, and the vanilla seeds and pod and bring to a simmer. Pour over the top of the cherries, cool to room temperature, cover, and refrigerate for up to 2 days. Remove them from the liquid and reserve both.

For the Sour Cherry Sauce
Fill one-third of a large saucepan with the poached cherry liquid and bring to a simmer. In a large heatproof bowl, toss the in the dried cherries and cover with plastic wrap; set over the pan of simmering water. Heat the cherries until they become plump, about 1 hour.

Transfer the mixture to a blender and puree until smooth. Pass through a fine-meshed sieve, chill, and transfer to a piping bag or squeeze bottle.

For the Caramelized Pistachios
Line a baking sheet with a Silpat. In a heavy-bottomed medium saucepan, heat the sugar to 250 degrees F. Stir in the nuts with a wooden spoon. Continue cooking the nuts over medium heat until the sugar turns from a frosted white color to a glossy caramel.

Pour onto the prepared tray and spread into an even layer. If using the nuts for a savory preparation, sprinkle lightly with salt. Cool at room temperature until hardened. Transfer to a food processor and pulse into small pieces. Cool and store in an airtight container up to 1 week.

For the Kirsch Cream
Up to 30 minutes before serving, in the bowl of an electric mixer fitted with a whisk, whip the powdered sugar and mascarpone until smooth. Stream in the heavy cream, continuing to whip on high to reach stiff peaks.

Whisk in the Kircshwasser and transfer to a piping bag fitted with a St. Honoré tip (Ateco #880 tip). Store chilled.

To Plate
For each serving take one piece of dacquoise and pipe about 2 tablespoons of cream onto it and stick about 16 cherry halves in a tightly coiled spiral on top. Pipe more cream onto the cherries in a circular pattern and top with a cherry with a stem and a few caramelized pistachios.

Transfer to a chilled dessert plate and pipe the sour cherry sauce onto the plate in a decorative fashion. Set one of the pistachio dacquoise ovals on the side, and top with a scoop of ice cream. 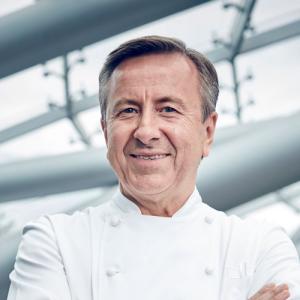 More Recipes From This Chef 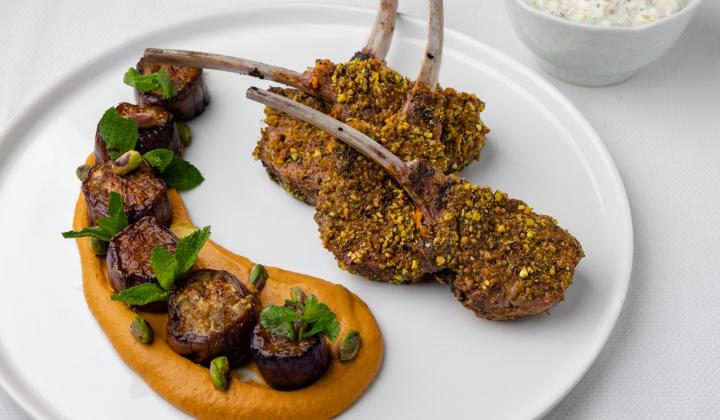 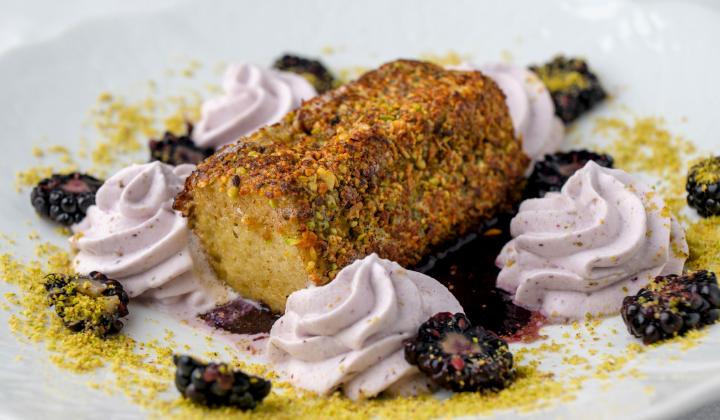 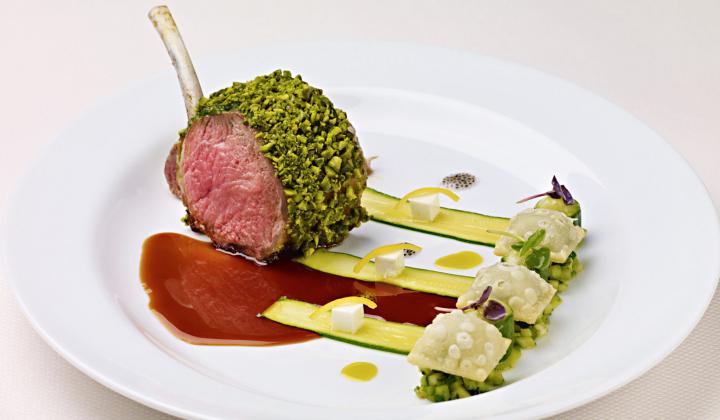